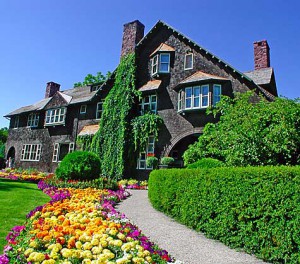 We are proud to have donated some of Loren's Auto Repair's services to the silent auction.  Look for them in this years Death By Chocolate Silent Auction and Murder Mystery night.

About the Mansion: The Conrad Mansion in Kalispell, Montana sits proudly today on the edge of the original townsite, atop a bluff overlooking the valley and the Swan mountain range.  When Charles E. Conrad, a founder of Kalispell, arrived in the Flathead Valley in 1891, this lovely town with its tree-lined streets was still but a dream.  But Conrad had vision, and he felt that not only had he found a good investment opportunity, but also a permanent home for his descendants.  Along with establishing the Kalispell Townsite Company and eventually the Conrad National Bank, he had this gracious Victorian home built for his beloved family in 1895 in what was then a wilderness.

Charles Conrad's youngest daughter, Alicia Conrad Campbell, actually lived in the home until 1964.  Then, in 1974, she made the decision to give the Conrad Mansion to the city of Kalispell in memory of her pioneering parents.

The city of Kalispell is grateful to Alicia and the Conrad Family for allowing the public to enjoy this beautiful historic landmark complete with most of the original family furnishings.

A visit to Kalispell isn't complete without enjoying a tour of this beautiful home!

The Conrad Mansion Museum is owned by the city of Kalispell but relies completely on proceeds from tours, special events, and donations to stay open for the public.

Please consider supporting the Mansion for future generations to enjoy!

Visit www.ConradMansion.com or the Mansion's FaceBook page for more information