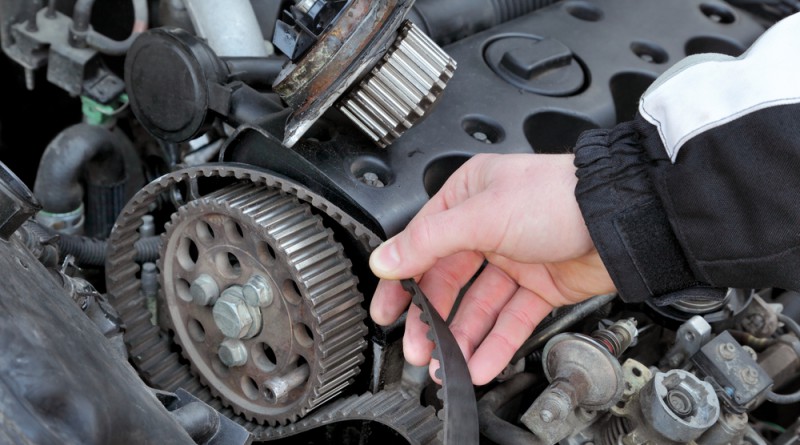 Your timing belt is the part of your engine that controls the timing of the engine’s valves. Some engines made by companies like Volkswagen, and Toyota, include timing gears. But most modern vehicles come with timing belts, which replaced the older style timing chains that were common until the 1980’s. Some luxury manufacturers, such as Mercedes and BMW, still use timing chains because of their increased durability.

Each cylinder in your engine has two to four valves; that means there are 12 to 24 valves for a V-6 engine, and up to 32 valves on a V-8 engine. A camshaft controls the valves as they open and close. The timing belt uses the rotation of the engine to drive the camshaft. It is called a timing belt because it has to be adjusted to rotate the camshaft and to stay in sync with the engine.

The timing belt looks like a rubber belt with teeth. Since they are not as durable as timing gears or timing chains, they can fail without any warning, which results in a breakdown. A technician can inspect your timing belt and look for cracks and frays. But getting to the belt to take a look can be almost as much work as changing it. That's why manufacturers recommend replacing the belt at certain intervals. For most vehicles, it's from 60-90 thousand miles. If your owners' manual doesn't specify an interval, ask your service advisor.

An interface engine is one where the valves and pistons are close together, which means that if the timing belt slips even a little, the pistons will slam into the open valves. A non-interference engine will just shut down if the timing belt breaks. Your vehicle will break down, but the engine will not suffer permanent damage. Even going a couple of oil changes past the recommended interval for changing the timing belt can result in serious damage or a breakdown. Replacing a timing belt is not cheap, but damage from a broken timing belt will cost much more to repair.

If your vehicle has more than a 60 thousand miles on it, you need to have your timing belt inspected as soon as possible to determine if and when it will need to be replaced. And on many cars, the timing belt drives the water pump. So, it may be a good idea to replace the water pump at the same time, because 90 percent of the work required for the new pump is already done when your belt is changed. Doing both at the same time saves you a lot of time and money.